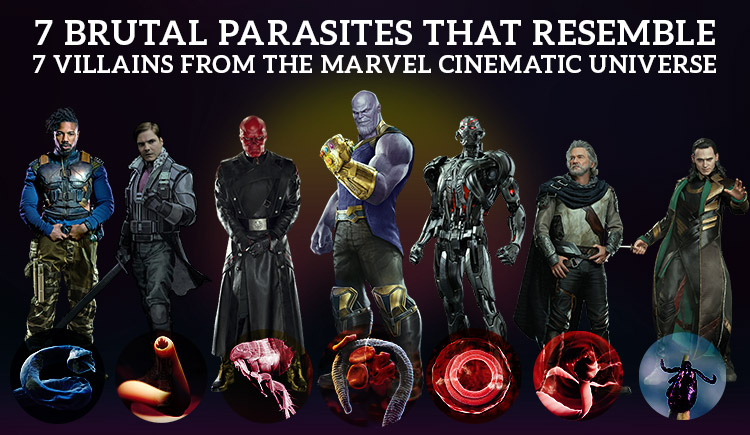 Thank you!!! For the love, you have given to our blog Six Original Avengers Of Flea & Tick Treatment Universe. After seeing the views that the blog has garnered and reading the appreciation emails of our esteemed customers, we are beholden to you to provide a sequel to the Avengers blog. Just like how MCU does it.

Therefore, we are back with a list of 7 brutal parasites that resemble 7 villains from the Marvel Cinematic Universe. This time it is about bad guys – the villains, because no matter how much we hate them, we all know that without them the might of a superhero is of no use. They highlight the goodness of a superhero. There’s a saying,” The stronger the Villain the stouter the Superhero.”

So, please be careful and hide your furry pal because bad guys are going to show up (especially Thanos, read on to know which parasite is Thanos – the Mad Titan) 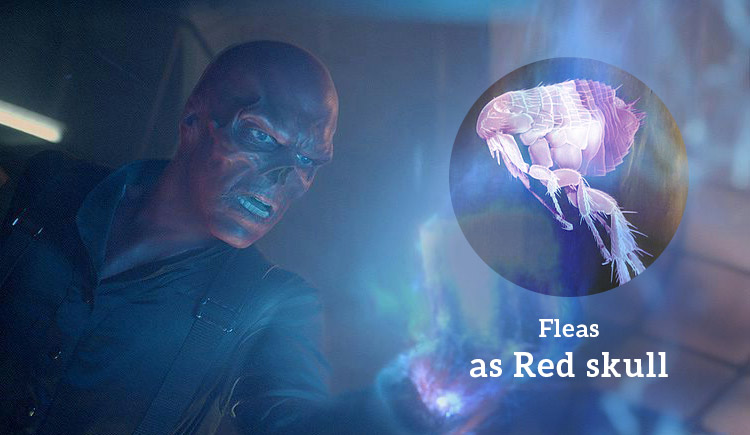 Red Skull can be termed as the first and the oldest Villains on the list. His only aim was to bomb all the capital cities of the world. Product of the Nazi empire, Red Skull’s aim was to harness the energy of infinity stones, but he could not bear the enormous energy. Just when we thought that we will never see him again, he reappeared in infinity war.

Fleas are bloodsuckers which are reddish brown in color after they feed on your companion’s blood. They are indeed the red skull of the parasitic world because of 3 similarities.

1st – They are one of the most ancient parasites who stayed on this planet for approximately 100 million years. Red Skull is also the oldest villain.

2nd – First Avenger – Captain America fought the first Villain Red Skull. And, that’s why we have kept fleas as red skull because the first avenger of flea and tick universe i.e. Frontline series fought the first villain and they are: Fleas.

3rd – Fleas re-emerge just when we think they are gone and Red Skull as well surprised us all in the Infinity war just when we forgot about him. 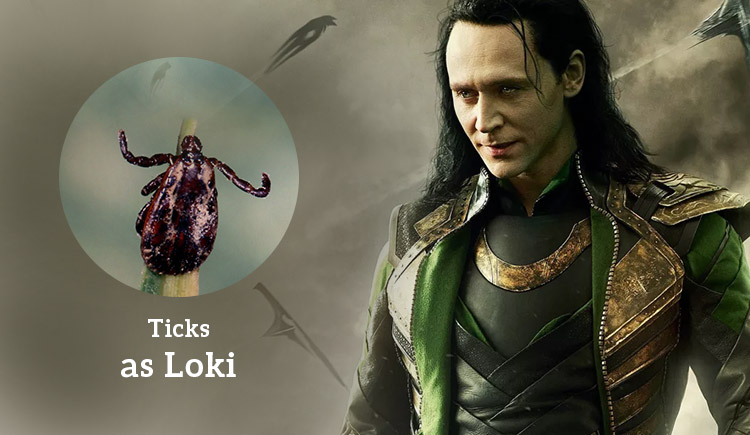 The God of Mischief keeps the audiences on their toes because nobody knows what he will do next. He was smart and selfish. He opened the gateway to dangerous creatures i.e. the Thanos’s army to the Earth.

Ticks resemble Loki in many ways,

Treatment of Ticks – Bravecto Chews –Thor: The Lord Of Thunder

Roundworms (Toxocara Canis) as Ultron From Avengers Age of Ultron 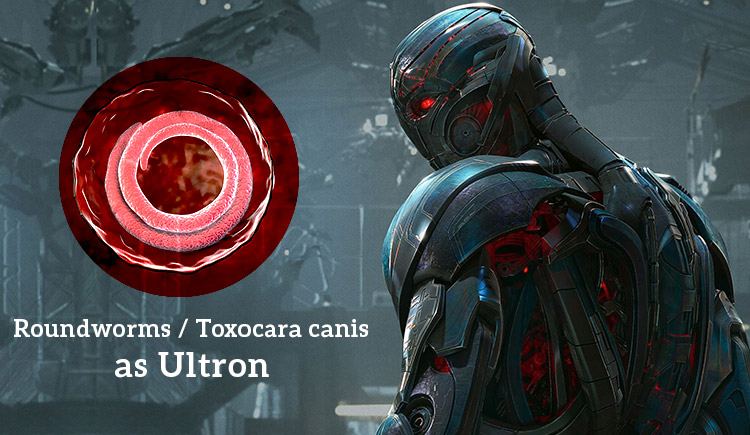 Ultron, an advanced Artificial Intelligence program that was hell-bent on destroying humans to make Earth a peaceful place was almost successful in dismantling Avengers. Ultron did it by mentally manipulating the Avengers. The effect of what the program was able to do can be seen in subsequent sequels of Marvel movies.

You might be surprised to know, but roundworm can infest your pal’s brain as well and can pose some huge complications like – Depression, Head tilting, Head pressing, Loss of muscle movement in the face, and Weakness.
Just what Ultron did to Avengers, they became weak and depressed. The battle was more psychological than physical. 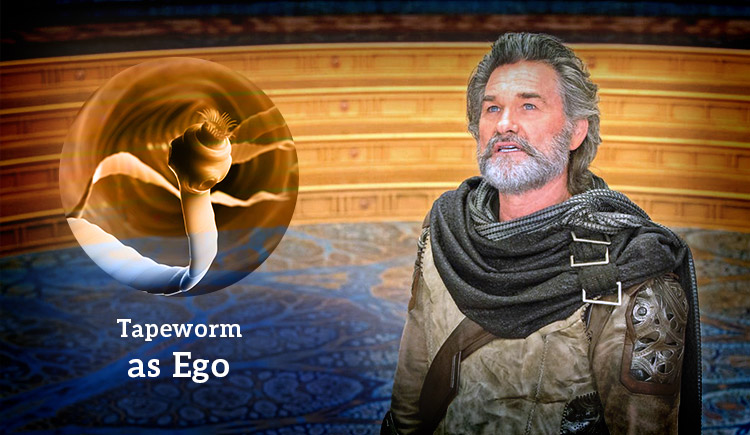 Ego looked harmless initially and we might think that he is just trying to get along with his son, but when his true intentions are revealed, it comes out that he only cares for himself and is an embodiment of cruelty. Similarly, initial Tapeworm infestations are harmless, but when it goes on for a prolonged time the infestation grows and causes harsh repercussions like Anemia and Weakness. 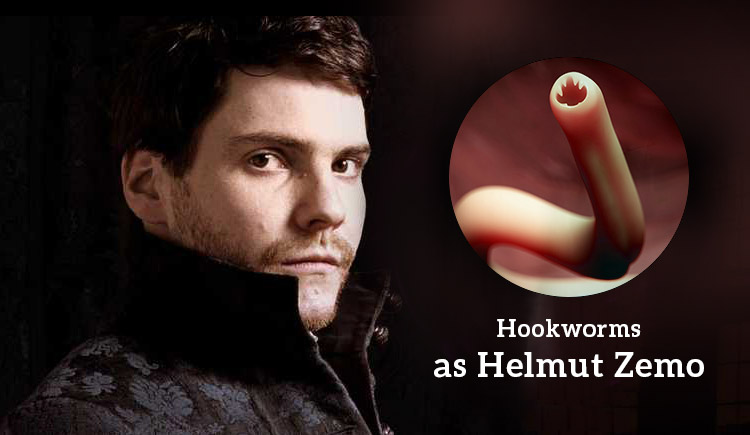 “An empire toppled by its enemies can rise again. But one which crumbles from within? That’s dead. Forever.”

Helmut Zemo – a simple human with no magic tricks or some great superpowers. He knew that he can’t take revenge from the Avengers for what happened to his family in the Battle of Sokovia by fighting with them physically. So, he used his brain and played with the minds of Avengers. Thus, igniting the Avengers Civil War by framing Winter Soldier for the murder of T’chala’s father’s death and showing the video of Bucky killing Iron Man’s parents.

He is somewhat similar to Ultron as far as playing with the mind and instigating people are concerned. But Ultron was more powerful physically and their motivations were also different.

Hookworms, another intestinal worm is Helmut Zemo because hookworms also have a tendency to infest brains of dogs and affect your pal’s mental and physical health. Like roundworms, they also get into the brain when your pal plays in stagnant water or by entering through ears or nose. 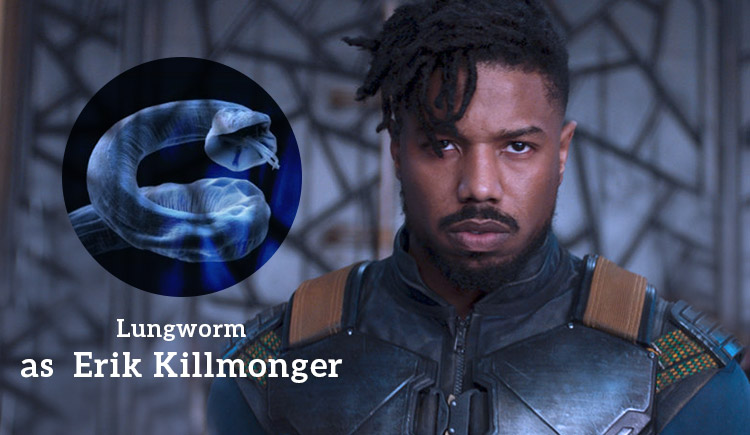 Erik Killmonger, silent yet very evil. He had some serious reasons to take on the King of Wakanda T’chala. He prepared from childhood and waited for the correct time and traveled all the way from Oakland to Wakanda to challenge Black Panther. The reason what makes him evil is that he not only challenged but also defeated T’chala in the fight.

The reason why lungworms are Erick Killmonger is because initially when a dog ingests lungworm larvae or eggs, they get to the stomach and then they travel all the way from the stomach/intestine to the lungs of your furry pal where they hatch or molt to cause many serious health issues that can be life-threatening. 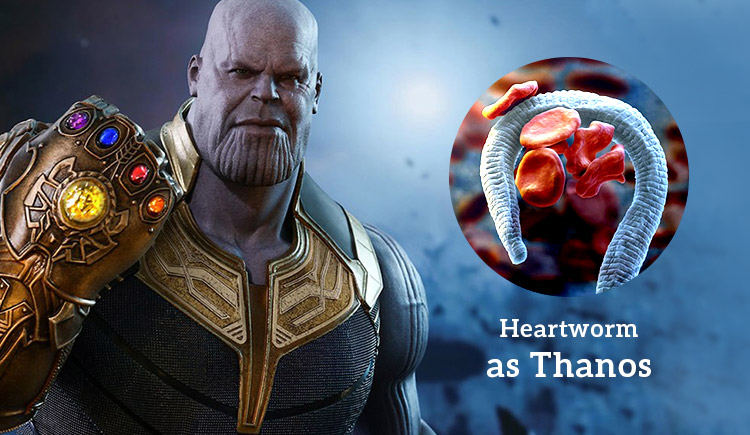 Thanos is the most brutal villain. He likes balanced things and wants a balanced world. And though his intentions in some manner seem right, his way of fulfilling them is totally wrong. A person who believes in genocide, Thanos is how he says, “I am Inevitable.”

Bruce Banner says in Avengers Infinity War,” Thanos. He’s a plague, Tony. He invades planets. He takes what he wants. He wipes out half the population.”

Thanos, even in Endgame wanted to destroy the whole universe. You can only prevent him but once he invades a planet he wreaks havoc into the lives of the people.

The reason, why heartworm is ‘Thanos’ of the parasitic universe, is that you can prevent them but once they infest your dog and become mature, they can damage the heart by blocking the arteries in such a way that the heart stops functioning or sometimes the heart functions partially. All the defense systems of your pal’s body fail to stop them like all the Avengers failed to stop Thanos from doing what he did. To terminate heartworms you either have to do a surgery or take treatments that have some serious side effects on your companion’s body. To kill Thanos, Iron Man had to sacrifice his own life.

Hope this was an entertaining and informative read for you. Now if you have read the previous blog – six original avengers of flea and tick treatment universe, we made you the “Nick Fury” of this Universe. And as Nick Fury, you need to understand the potential threats to your pet so that you can choose the desired Treatment/Avenger to eradicate the threats, and this blog will be helpful in that way.